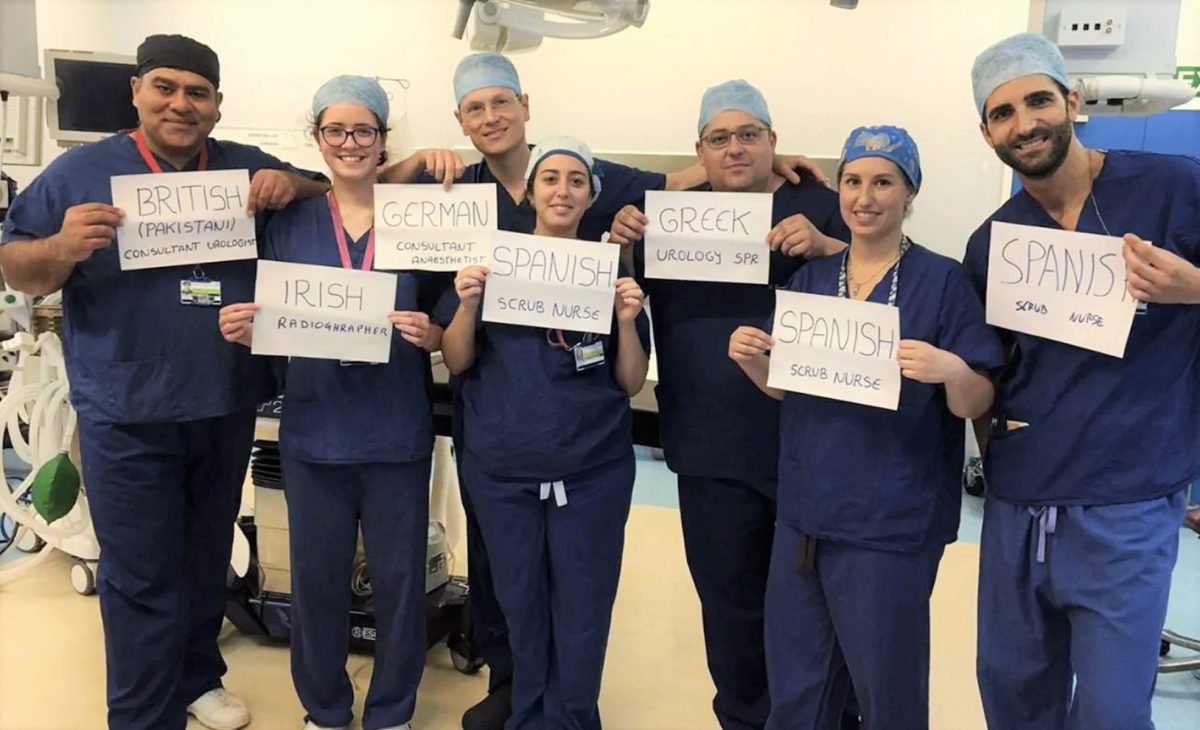 Earlier this month, the British Medical Association’s Medical Students Conference voted overwhelmingly to campaign not only to defend free movement, but to extend it to all workers regardless of nationality. Giancarlo Bell, who proposed the motion as a delegate from Glasgow (which you can read below), explains why.

The British Medical Association has always been openly critical of the right-wing campaign behind Brexit and the effect that it could have on healthcare resources and the medical workforce. At the 2018 Annual Representatives Meeting, members voted in favour of opposing Brexit “as a whole”. Since then, our trade union has made it clear that it wants a deal which involves close ties with Europe as well as supporting efforts to avoid leaving the EU altogether.

There have been several motions, including one proposed by Kings College London at the recent 2019 Medical Students Conference, which specifically consider the impact of Brexit on the medical workforce and call for allowances to be made for salary thresholds and visas to allow the continued flow of European workers into the healthcare sector. I fully support these efforts – it is important that we recognise the value of our hardworking European nurses, doctors, and other NHS staff and that we continue to allow skilled healthcare workers from abroad to come and make a home here. However, I think it is something of a moral cop-out for our union to lend its support only to those who work in the NHS when Brexit is poised to change the lives of workers and families of all sorts up and down the country unless we work to protect freedom of movement.

The government is unwilling to support free movement in any deal with the EU and is unlikely to make adequate arrangements to maintain the flow of workers from Europe. Since the cross-party Brexit talks have been taking place, I have been disheartened to learn that ending free movement is also a policy of the opposition. As such, I submitted these demands as an emergency motion to the 2019 Medical Students Conference.

This is an issue close to my heart. My grandparents survived fascist Italy as well as Nazi and Allied occupations of their tiny village and were allowed to move across Europe to make a home in Scotland. Their story is not unique, European workers are an integral part of the fabric of the UK. As such, as a member of union of doctors, I wanted to make a statement that free movement within Europe is an absolute priority for us. Thanks to the support of my medical student colleagues, we have demanded that the opposition make free movement a red line in their negotiations with the government. We want to hold them to account – in their Brexit “tests” they claim that no deal is fit for purpose unless it protects the rights of workers, and it is increasingly clear that without free movement thousands of workers across the UK will be left in an extremely vulnerable position.

In passing iii. of the motion, we have gone further still. While I am extremely grateful for the privilege of free movement within Europe and for the advantages that it has bestowed upon me and my generation, I want to admonish the EU for its current immigration policy. As the EU grows and develops, member states continue to wrestle with the question – “who deserves to have the chance to travel and live and work here?”. The answer to this question, unfortunately, seems to be white, wealthy Christians. The EU continues to sit on its hands while states like Italy, Hungary, and Poland become proponents of extremist far right nationalism and flout international law with abandon. In the absence of harsher disciplinary action, the EU serves to enable these extremist agendas and emboldens those fighting to maintain Fortress Europe. In my eyes, workers from Eritrea, Ghana, or Afghanistan should have the same rights to come and work on these shores as bankers from Frankfurt. As such, I included iii. to demand that a post-Brexit UK not only maintains its current level of free movement but extend the policy further so that we do not discriminate against workers based on their nationality, income, or religion.

Last year, the List project recorded that over 35,000 individuals have died trying to reach Europe in the past twenty years. Some died through violence or suicide, but the overwhelming majority drowned in the Mediterranean. As a union of doctors, if their deaths had been caused by an influenza outbreak, the BMA would acknowledge the scale of the public health crisis and we would do what we can to help. As it stands, our inaction is worse. Their deaths were a political decision, made by those who want to use the EU to serve the most privileged individuals on the continent. By demanding the extension of free movement, we take a step towards ending a system which judges the value of human life based on where somebody comes from, the colour of their skin, and the content of their faith.

I was delighted that my medical student colleagues supported all parts of my motion. The UK is nothing without its workers, who come from a vast array of cultural, ethnic, religious, and linguistic backgrounds. The Medical Students Conference has made it clear that it wants to protect and encourage this incredible vibrancy in our population, and I hope that the government and the opposition take note.