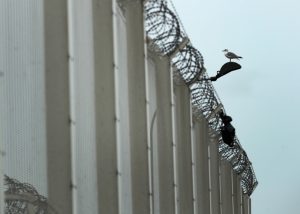 The idea that mainstream politics has failed to talk enough about immigration has become an idea so entrenched in British political life that it is almost impossible to challenge. And yet, like the idea that the BBC has a leftwing bias, it can be defined by virtue of being precisely the opposite of the truth.

In practice, British politics seems to focus on little else. The dominant political movement of the past five years has been UKIP. We have a new Prime Minister who made her name as the most hardline home secretary in recent history, complete with a “go home” van and an Immigration Act designed to “create a hostile environment” for migrants. So high is migration up her political agenda that she will place reducing numbers ahead of the immediate interests of British capital, even as the pound crashes through the floor.

And the obsession goes far beyond the past five years. The Conservative party ran its 2005 general election campaign on the slogan “it’s not racist to impose limits on immigration”. New Labour’s time in office saw an economically-couched defence of migration, alongside bellicose rhetoric about asylum seekers “swamping” Britain, and a tabloid-backed campaign against those desperately trying to get through the Channel tunnel. Within the Labour movement, the socially conservative Blue Labour tendency advanced an anti-migration politics which heavily influenced the thinking of the current generation of Labour politicians.

The claim that Britain has lacked a proper debate on immigration is, most of the time, a catchphrase muttered for cover by politicians and propagandists on the right. The one kernel of truth is that they have driven the debate exclusively, without making any room for the progressive left.

The only real way to build a progressive narrative around people’s “concerns about immigration” is to relocate the issue as a matter of social and economic policy, and a neglect of many communities originating in Thatcherism. This is by no means impossible – attitudes to immigration are more linked to deprivation than to actual migration. But with a Labour party for years committed to austerity, privatisation, and the financialisation of the economy, such a narrative was simply untenable.

Now, the left is a growing force in British politics. The Labour leadership is committed to massive public investment. Everything should be different. So what is alarming is that, post-referendum, the left in general seems to be squeamish about the idea of defending free movement. Unlike free trade, it was not one of the Labour leadership’s red lines in the aftermath of the referendum. Even on the Labour left, unlikely people can be found saying that freedom of movement is simply part of a wider deregulatory globalisation that “hasn’t worked” for many people in Britain.

This inference is dangerous for the left’s wider political narrative – it draws blame away from underinvestment and exploitative employers. It is also, for the most part, untrue. There is some evidence to suggest that wage growth has been held back as a result of immigration, but it is limited to relatively small parts of the economy, and amounts to an average 0.3 per cent decrease for each 10 percentage point rise in the proportion of immigrants working in a given sector. Making immigration controls a part of Labour’s policy offering is not an act of “listening”. It is giving credence, and further political salience, to an objective falsehood.

In terms of the principle, free movement of people ought to be a no brainer for entire progressive political spectrum – far beyond the radical left for whom it is a first step to a borderless world. At root, what it represents inside the EU is the creation, through the mixing of people, families and lives, the creation of a lived identity that stretches beyond fractious national frontiers. By opening up the world as a place to freely live and share ideas, it expands the horizons of human potential. The right to live where you want – like the right to love who want, dress how you want, or say what you want – is an extension of human freedom and progress which the left has defended.

Of course, freedom of movement has largely been permitted not for these high-minded reasons, but because it benefits employers. Then again, so did the fact that women went to work rather than staying at home. The left and the labour movement should by now understand that the basic reason for low wages and social inequity is not migrants in the workplace, but the economic system – and that the solution is not to limit people’s rights or turn back the clock, but to struggle for better conditions and for democracy in the economy.

The temptation for Labour to abandon free movement of people as a goal in the Brexit negotiations is underpinned by a sense of realism which is profoundly misplaced. To win elections, Labour must redefine the immigration debate, not simply feed it. And on the ground, there is a desperate need to organise precarious workers, many of whom are immigrants. For Labour to retreat on freedom of movement – to abandon the rights of its own people, migrant workers, in favour of maintaining a fictional social stability for one section of the British working class – would place it on the wrong side of history, strategically as well as morally.

Ultimately, the dilemma being posed by Brexit is about the future of the left. One path leads to a rehashed version of the post-war social democratic settlement. The other is difficult – it will require the creation of a whole new way of talking about migration, identity and international solidarity – but it is the only path that will allow the left to grasp and define a process of globalisation which is, at present, tearing both it, and the communities it once represented, apart.