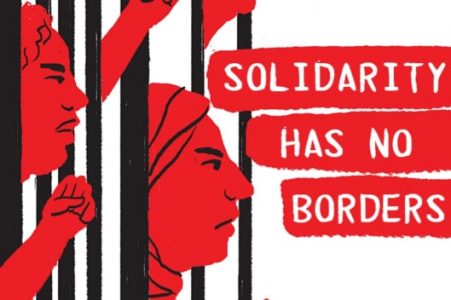 The latest move in the Tory government’s war against migrants – the floating of proposals to remove asylum-seekers to camps in remote locations, hundreds or thousands of miles away, while their claims are processed – is once again an outrage against human rights and the values of rationality, compassion and solidarity.

It has been condemned by numerous humanitarian and migrants’ rights organisations, by the UN High Commissioner for Refugees and, though in fairly timid terms, by the Labour Party. Many organisations have pointed to the humanitarian consequences of Australia’s use of this model. As Enver Solomon of the Refugee Council put it: “We know from the Australian model that offshore detention leads to appalling outcomes including high levels of self-harm and mental illness. It is an inhumane policy…”

Rossella Pagliuchi-Lor, the UNHCR’s UK representative, pointed out that such measures will work to undermine the whole international system of protection for refugees. Sonia Lenegan, legal director at the Immigration Law Practitioners’ Association, nailed the Tories’ absurd claim that such measures are necessary to protect migrants from people smugglers: “This is not a safe option, and it will be the government putting refugees’ lives at risk instead of people smugglers.” The best way to protect people is to welcome and integrate them into UK society.

Whether the proposal is to move asylum-seekers three hundred miles to the Isle of Man, a thousand miles to Gibraltar, or 4,000 miles to Ascension island in the Atlantic, it must be defeated.

The deepening sadism of the Tories’ anti-migrant policies should remind us that things will not stay still. Either we build momentum to comprehensive reverse the decades-long push towards marginalisation and demonisation of refugees and other migrants, or the downwards spiral will continue.

The labour movement must fight to win safe routes to the UK for asylum-seekers, for the abolition of all immigration detention, and for rights to family union, to work with the same rights as other workers, and to access normal benefits and public services. Our campaign continues to fight for all of these – and are pushing to get Labour to commit at this year’s National Conference.