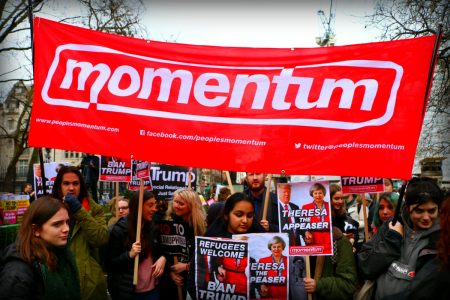 During the Momentum Policy Primary process, the Labour Campaign for Free Movement worked with the local Momentum groups in Watford, Oxfordshire and Stevenage, and Lesbians and Gays Support the Migrants (LGSM), to write the joint motion: “Migrants welcome: end deportations and the racist Hostile Environment”.

This builds on our successful motion from 2019 that passed overwhelmingly at the Labour Party’s National Conference – making important demands for our party to campaign on at the grassroots, in opposition, and in Government.

We need your support to get this prioritised by Momentum members, maximising its chance of being submitted to Labour Party Conference 2021, and won there too.

You can read all motions here, and included below is the agreed composite motion.

Covid-19 has underlined how Hostile Environment policies hurt us all. Excluded from social and medical support, migrants have been left hyper-vulnerable to employers. Many EU citizens are falling through gaps in the Settled Status scheme.

The Stansted 15’s exoneration, appalling conditions at Napier Barracks, deaths in the Channel and closing of safe routes for child refugees highlight the cruelty of Tory migration policy. The Windrush Lessons Learned review has been ignored by the government.

Attacks on migrants are attacks on the labour movement. Making migrant workers precarious diminishes our power to unionise and fight back.

Conference resolves that Labour will work at all government levels, and campaign at the grassroots, to:
● Re-enter Europe’s free movement area, and pursue free movement with other countries, including in all future trade deals.
● Reject immigration systems based on migrants’ incomes, savings or utility to employers;
● Abolish “no recourse to public funds”, minimum income requirements, and all Hostile Environment policies including restrictions on NHS access.
● Introduce an easy process for all UK residents to gain permanent residency with equal rights.
● Introduce equal voting rights for all UK residents.
● Guarantee safe routes for asylum seekers and rights to family reunion, work and social security.
● End all immigration raids, detention and deportation, especially childhood-arrival deportations and racist “double sentencing”.
● Replace Settled Status with an automatic Right to Stay.
● Support workers who refuse to implement deportations or Hostile Environment measures.