Bigotry seeks company in the UK

Bigotry seeks company in the UK 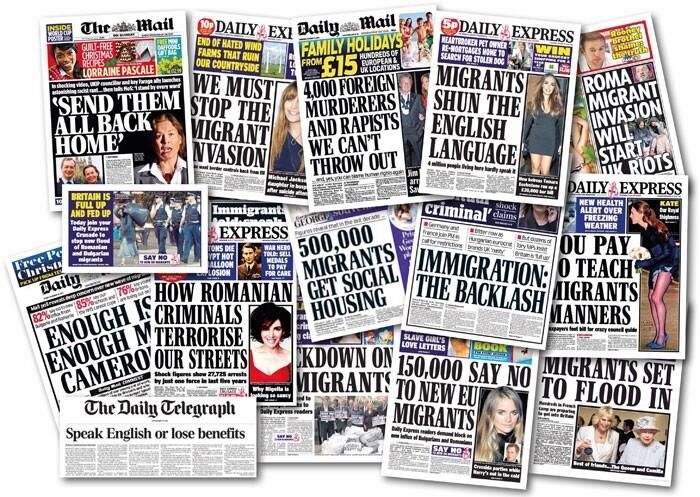 This open letter was originally published on openDemocracy on 19 December 2016. The original list of signatories can be viewed there. Our republication is not intended to indicate that all of them support the Labour Campaign for Free Movement.

We historians at the University of Warwick are very concerned about the racism that is becoming increasingly commonplace over Britain, especially in the aftermath of the Brexit vote.

We are witnessing a profound authoritarian shift in long-established liberal democracies around the world. The recent result of the US election is only the most dramatic illustration of this. But while we have reason to worry about Trump, grave developments are also afoot in Britain.

Since 23 June, this country has experienced one of the greatest upsurges in racism that has happened in our lifetimes. This has affected EU migrants: Poles have been attacked as “vermin”, a Czech and a Polish man were even murdered, while mothers with infants are being assaulted on the street. This October a Polish shop in Coventry, just over five miles away from Warwick’s Campus, was the victim of an arson attack that many suspect to be racially motivated. The attacks also target Black and Minority Ethnic British citizens – a painful reminder that when certain forms of racism become legitimised, its targets diversify. And since bigotry loves company, we should not be surprised that homophobic attacks have increased by 147%.

The mainstream media has colluded in the myth of immigration as the source of all the nation’s ills, with demurring voices increasingly squeezed out of the public sphere.

We see the language of the most xenophobic and far right sections of British society becoming mainstream, and statements that would have been unthinkable earlier cascading from the mouths of the political establishment.

History is being made, and is doing so at such an alarming pace that it is easy to feel as if we have no control over the direction in which it takes us. Yet as historians we believe that it is people – our everyday actions and choices and our efforts or indifference to the societies in which we live – that have a role in determining this history. This is not a moment for intellectuals (or anyone else) to sit back and contemplate, but instead to step up and speak out.

The xenophobia exploding around us makes skilful use of nostalgic myths about a ‘lost’ British greatness. It harks back to themes of empire, national glory, and ‘taking our country back’. We believe this mythmaking is enabled by a selective amnesia about Britain’s national and imperial past. One symptom is the profound public ignorance about the realities of the British Empire, whose history is whitewashed by the mainstream media, political parties, and much of the education system.

British domination of the world in the nineteenth and early twentieth century involved white Britons conquering other countries, exploiting their national resources, and legitimizing this through a myth of racial superiority. Assiduous attempts are made in our public sphere to domesticate this history – by erasing the stories of massacre, plunder and racism that made up the Empire. Conversely, the greater social liberalism that exists in contemporary Britain – something the mainstream media often pays lip service to – would have been unthinkable without multiculturalism and immigration, themselves the historical products of Empire and decolonization. If we are to resist the myths being peddled today, we need to engage seriously with the real past, instead of an imaginary history of unbroken glory and virtue somehow poisoned by ‘migrants’.

Politicians and commentators, none of them working-class, conjure up the spectre of ‘ordinary working class people’, invariably defined as homogenously white and inherently racist. This myth is used to justify policies that leave refugees drowning in the sea or herded into camps on the basis that ‘we have to give the people what they want’. This ignores the existence of a multi-cultural working class across the UK, and erases a long history of BME people living and working in Britain. British society, past and present, is indeed scarred by racism, and migrant communities have often become scapegoats for the worst effects of austerity. Yet to claim that racism is the special preserve of ‘the working class’ is historically and factually incorrect. In fact, working class communities are far more ethnically diverse than public schools and the Houses of Parliament. At its best, the British labour movement has been a place in which alliances between Black and white working people have been built, and BME workers have played a central role in struggles for improvements in pay and conditions for working-class people across ethnic boundaries.

The events of the last months have alarming historical resonances. The Conservative conference in Birmingham, where the PM notoriously stigmatized migrants as “citizens of nowhere”, was a truly chilling spectacle. Theresa May’s racist remarks were accompanied by demands for foreign GPs to be replaced by British colleagues by 2025.  Moreover, Amber Rudd called for firms employing foreigners to be ‘named and shamed’. All this eerily echoes the 1930s in Germany. In the spring of 1933, the Nazi regime removed German-Jewish physicians from the state hospitals, lest they touch “Aryan” bodies. Over the next twelve years, ordinary Germans became complicit in the Holocaust by singling out their Jewish friends, colleagues, and neighbours. Ordinary people succumbed to racism, and this provided the foundation for the horrors to come.

Of course, that was the past. But while most Britons will agree that Nazi Germany was fundamentally debased, we need to remember that Nazism too began with small acts of prejudice and social exclusion, and public indifference to such acts normalized Nazi terror.

There is absolutely no reason to believe that events of a similarly horrifying character are not possible today. The responsibility to be a decent human being lies with each of us. Dehumanising fellow human beings as non-citizens, and stigmatizing them for being migrants, is inherently racist, and wrong. More than anything else, contemporary Britain’s vibrancy flows from its pluralist and multicultural society. We need to fight to keep it so.

This article was published by openDemocracy under a Creative Commons Attribution-NonCommercial 4.0 International licence.