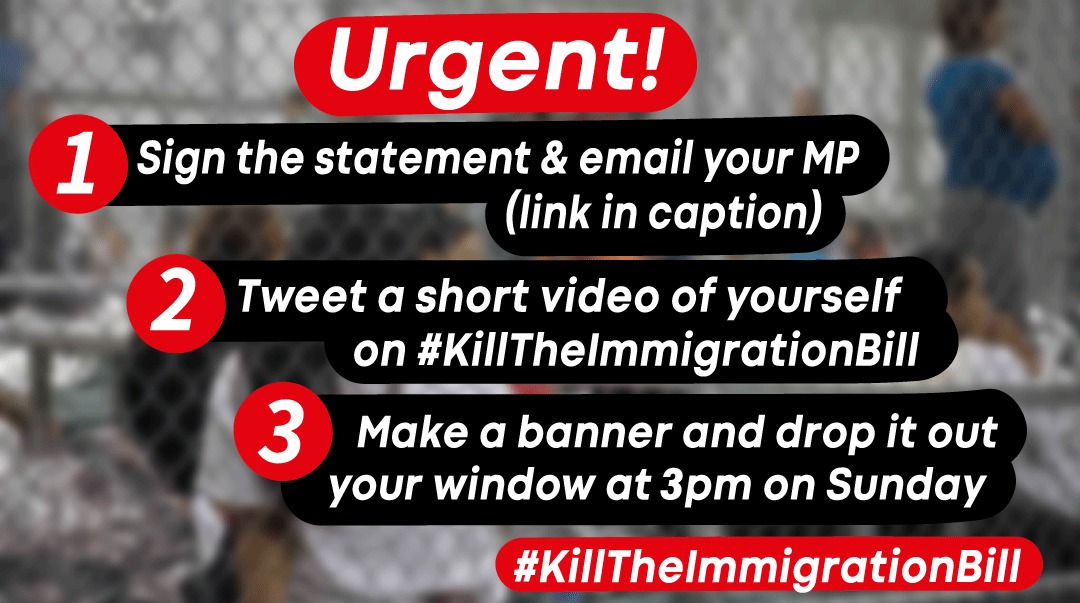 The Tories are trying to rush through their racist new Immigration Bill under the cover of the pandemic. The next stage of debate in Parliament has been announced at short notice as next Monday 18 May! We’re calling on the Labour leadership and MPs to oppose the Tories’ xenophobia by standing up for the alternative: solidarity, equality and free movement for all.

Time is short and it’s up to us to stand against this racist attack on migrants! For a more in-depth briefing about what the bill will do, check out the recording of our recent zoom meeting where we heard from policy expert Zoe Gardner and MP Nadia Whittome. We’ll keep this page updated with more action you can take between now and Monday. Right now, you can do three things:

And finally, spread the word!

The Immigration Bill’s “Henry VIII” powers will mean a blank cheque for the Home Secretary to make up immigration policy with minimal accountability. The proposals published so far will slam the door in the faces of untold numbers of working-class people. Those who they allow in, they will leave precarious and at the mercy of exploitative employers. They will mean more dehumanising, racist and violent attacks like the deportations we recently protested. They will fuel the suspicion and resentment that divide our communities and our workplaces.

As migrants keep our society going through the pandemic – from key workers (many of them “low-skilled”) to the friends, relatives & neighbours volunteering in communities & holding each other up – this attack could hardly be more offensively timed.

In our campaign against the Bill, our party must be crystal clear: ending free movement, restricting immigration and attacking migrants’ rights will do nothing to fix the problems facing working-class people.

Instead I urge you to stand unapologetically for the vision of free movement, equality and solidarity set out in the policy that was overwhelmingly endorsed by Labour members and trade unions at last year’s Labour conference:
• To defend and extend the free movement of people.
• To reject any immigration system based on incomes, migrants’ utility to employers, or number caps or targets.
• To close every detention centre.
• To end all Hostile Environment measures and restrictions on migrants’ NHS access.
• To ensure the right to family reunion is unconditional.
• To abolish “no recourse to public funds”, guaranteeing the social security safety net to everyone.
• To extend equal voting rights to all UK residents.

In the face of the pandemic, these policies are more necessary than ever. In particular, I urge you to fight for documented and undocumented migrants to gain leave to remain with equal access to services and healthcare; to empty detention centres; and to accept a fair share of refugees so the Mediterranean camps endangering thousands can be emptied.

These are the principles on which Labour and our unions must base our opposition to this rotten, xenophobic policy.