National Meeting 2019: What we decided 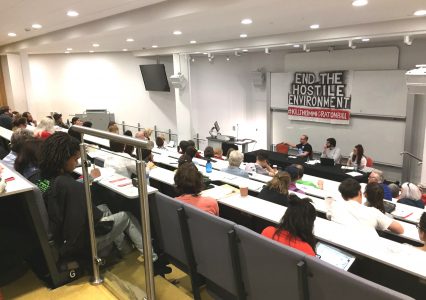 This Sunday, on the 7th of July, took place our national meeting. It was a productive day filled with vibrant debate, informative workshops and planning ahead. We heard from a range of inspiring speakers and discussed topics such as fighting the Immigration Bill, closing detention centres, resisting the hostile environment in public services and scrapping No Recourse to Public Funds, among many others. We noted all the exciting ideas that came out of the workshops and plenaries to make sure they’re put into action, and created working groups for our priority campaigns.

Eighteen people put themselves forward for the Steering Committee and we voted to elect all of them. The list is as follows:

We also voted on our statement of principles. The final, amended version is posted below (amendments 1-3 passed, amendments 4-6 didn’t.)

Throughout the day, we collected over £100 to the fighting fund of mainly migrant cleaners who work outsourced on the London underground and are balloting for strike action.

If you couldn’t make it but want to get more involved in our campaign, drop us an email at info@labourfreemovement.org and let us know if there’s anything you’re particularly interested in. And don’t forget to submit our conference motion to your CLP!

The Labour Campaign for Free Movement is a network of Labour members and supporters campaigning to defend and extend free movement and migrants’ rights.

Ending free movement with Europe is an immediate threat to the rights of millions: both EU citizens who have come here or may want to in future, and UK citizens who will lose the right to move, live and work freely in those countries. Labour and our trade unions must defend it. But we cannot stop there.

And we must oppose the lethal Fortress Europe policies imposed at and beyond the EU’s borders, standing instead for welcoming refugees and extending free movement.