To prevent the next Windrush scandal, the next Labour manifesto must commit to dismantling the Hostile Environment in full 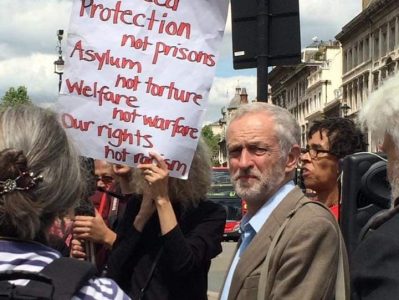 When the Windrush scandal broke in April last year, the nation was rightly appalled. But really, we had no right to be shocked. The horror of Windrush was not, after all, the sudden revelation of a parallel world of state-sponsored destitution, detention and deportation: this had existed for years, in plain sight. Revelations that migrants were being separated from their children, denied access to medical treatment or forced to sleep on the streets were nothing new. By 2018, there had been numerous exposés of abuse, ill-treatment and deaths in immigration detention. Nor was the calculated cruelty of the system in any sense a secret; consider Theresa May’s now-infamous public boast (as Home Secretary in 2012) of her desire to create a “really hostile environment”, in effect to make life unbearable for certain categories of migrants. This hostility was directed against a supposedly nameless faceless group, the “illegals”, beloved of tabloid editors and Home Office statisticians. The horror came from the fact that ordinary newspaper readers had looked into the faces of the Windrush victims and recognized their own friends, neighbours and family members.

These people were not, as the government hastened to explain, the intended targets. But, of course, this does nothing to absolve the perpetrators. And though the very particular betrayal of the Windrush generation is in itself a shameful scandal, it must never be forgotten that the abuse was made possible by the quiet yet widespread acceptance of a dehumanized category of people with dark skins to whom basic human rights do not apply. A society that accepts indefinite detention without trial; that is prepared to see a cancer patient forcibly taken from her hospital bed and put a plane; that demands no redress for the “unlawful killing” of a deportee surrounded by passengers on a British Airways flight, is a society that is capable of almost anything. In such conditions, with little scrutiny and minimal opposition, it is little wonder that the Hostile Environment spread like a stain.

The Windrush scandal could not have happened without the physical infrastructure of barbed wire Britain; a network of privately-run immigration prisons into which people can disappear with little to no judicial oversight. But the ideological infrastructure is important too, not least in explaining why it took so long to raise the alarm. A society that is accustomed to the sight of immigration raids, that co-opts doctors, teachers, landlords and employers to act as border guards, and grants to its civil servants the power to detain people at the click of a button, is a society whose defences against arbitrary tyranny are being steadily undermined. How else can you explain how the nation that prided itself for centuries on Magna Carta and habeas corpus became the country whose government had to apologise last year for unlawfully rounding up and deporting its own citizens, a number of whom have since died?

It is a sobering fact that in October 2013, only seven Labour MPs were prepared to stand in outright opposition to an Immigration Bill that removed legal protection from longstanding Commonwealth residents, this paving the way for the Windrush scandal. Members can however take pride in the fact that the future leader of our party, Jeremy Corbyn, along with the future Shadow Chancellor and Shadow Home Secretary, were among those with the courage to challenge what Corbyn described at the time as “dog-whistle politics, the mantras being that every immigrant is an illegal immigrant who must somehow be condemned and that immigration is the cause of all the problems in our society.” As Corbyn went on to say, and rightly, this doctrine “weakens and demeans all of us and our society, and we are all the losers for that.”

In the event, the Windrush scandal caused outrage on all sides. But no government can guarantee that this will not happen again without fundamental changes to the system. The next Labour government needs to commit to these changes, and to building support for them. It needs to work at changing the narrative on immigration as we did on austerity, winning back the ideological high ground conceded long ago to the hard right. This means standing up for human rights at every turn, and challenging the migration myths at every level, from the Labour doorstep to the corridors of power.  And it means being honest too, about our party’s own complicity in past abuses. It should be a matter of shame to all Labour members that Ama Sumani, a terminally ill mother of two, was deported to Ghana under a Labour government in 2008, despite the protests of her doctors, in a decision denounced by the Lancet as ‘atrocious barbarism’.

This barbarism is now the status quo. To take another example, freedom of information requests have revealed that 734 people who entered the UK as minors were removed from the country between January 2015 and September 2018: including 141 sent to Afghanistan; 30 to Iraq, six to Somalia and at least one to Sudan (despite the fact that the Foreign Office advises against almost all travel to these countries on grounds of safety). Diane Abbott signalled last year that this abhorrent practice – which terrorises children (including the four Eritrean teenagers whose tragic suicides were reported recently) – should end. These already vulnerable young people have a right to rebuild their lives in Britain, free from the threat of deportation on reaching adulthood, and the next Labour manifesto should so say so, emphatically.

No doubt there will be some who argue that the public are not ready for this humane policy; that the years of cynical manipulation by the tabloid press have done their work. As someone who has sat by the bedside of an orphaned teenage boy who in 2016 attempted to end his life for the second time, faced with the prospect of deportation to a war zone, I must beg to disagree.

Instead, we should follow the lead of the Labour Campaign for Free Movement, and the Labour members who voted overwhelmingly at our last conference to end the hostile environment, in all its vile manifestations. I believe that we can hold our heads up, fight the election as the party of justice and humanity, and that we can win.