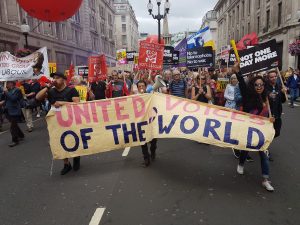 by Petros Elia, General Secretary,United Voices of the World union

In light of recent debates on Freedom of Movement (FoM) and the Posted Workers Directive (PWD) here’s my tuppence worth.

The PWD is definitely a gift to the bosses which brings no benefit to workers either from the host or home country and should be scrapped immediately and entirely. However, I believe that the extent and effect of the PWD is being overstated by some, being used as a red herring by others and being disingenuously conflated with Freedom of Movement (FoM).

Firstly, some facts about the PWD which have largely been missing from the debate:

There are only 1.2 million Posted workers in the entire EU which is around 0.5% of the total workforce. Two of the three largest home countries from where posted workers originate are Germany and France, whose workers are unlikely to accept less than their UK counterparts. The largest number of posted workers are received by Germany, France, Belgium and the Netherlands. The UK is no where to be seen.

Although it is true that Posted workers can get paid less than their co-workers of the host country they cannot be paid under the national minimum wage of the host country. This means that in the minimum, or slightly above minimum wage sectors where millions of workers face the highest degrees of abuse and exploitation and are in the most need of union organisation, the PWD has neither caused or even contributed to their plight.

Secondly, it is true, in principle, that the transience of PWD workers arguably makes them harder to unionise and organise. But it’s not impossible. There are successful examples of organised workers striking in solidarity with Posted workers demanding equality between them and UK workers. See, for example, the Fawley Oil Refinery dispute in 2016.

In any event, transient employment is often the norm in the construction sector and certainly in the service sector which, again, is not a phenomena which has been created or even perpetuated by the PWD. And so the issue around organising transient workers will continue irrespective of the PWD.

Whilst I personally want the PWD scrapped, even if it’s not it would still be possible to preclude it from being used to undercut host country workers’ wages by demanding what (that well known hard left!) President of the European Commission, Jean-Claude Juncker, has called for, namely: ‘equal pay for the equal work at the same place’.

If his call is heeded then the PWD would ultimately become redundant and blame for the UK’s low wage economy and the low levels of trade union strength and density – which would continue – would have to be apportioned else where.

Much of what I said about the PWD also applies to FoM. It is worth mentioning here though again that there is no evidence for the claim that migrants depress wages or obstruct union organising drives. In fact, migrant workers are currently, and have been historically, at the forefront of some of the most successful campaigns for higher wages and better terms and conditions. There is also no theoretical basis for the claim that migrants are more deferrent to the bosses or adverse to unions.

In other words, the problem is unorganised workers, not migrant workers. And surplus and scab labour, reference to which is often used as a Left defence of the call to restrict FoM, has always existed and will always exist with or without FoM. After all, unemployment is not a symptom of migration but a necessary component of Capitalism. And the prevalence of scab and surplus Labour does not explain the high and historic levels of unorganised workers.

Secondly, there appears to be a bizarre allegation being levelled against those in favour of EU FoM by those in favour of restricting FoM that the former are only in favour of White European migration and therefore, by extension, are discriminating against non-EU (non-White) migrants.

Leaving aside the false assumption that all EU migrants are White and all non-EU migrants are non-White, it is clearly not the case that the main concern of those calling for restricted FoM within the EU is the fact there is restricted FoM for non-EU citizens. That position is incongruous and, even if heartfelt, should logically lead to a call for No Borders, not controlled borders.

On that note, it is clearly morally untenable to only call for EU FoM and not universal FoM, especially because of the UK’s imperial and colonial pillaging of the non-EU and the tens of thousands of migrants who have tragically died crossing the Mediterranean who could have been saved were legal passage available.

There are many reasons why the UK is a low wage economy full of insecure and bullshit jobs, and why it has record low levels of union density, collective bargaining agreements, strike days, and record high levels of rent and transport and not as good an NHS or education system as would otherwise be possible, but migrant workers, the PWD and FoM aren’t some of them.

The only solution is therefore a massive education and organisation drive on the part of unions, as well as the complete overhaul of anti-union legislation and pernicious employment law which currently allows the bosses to hire, fire and punish workers at will without fear of reprisals.

To finish, as Marx has often been invoked by some on the Left to defend the call to restrict FoM in the interest of the working class I will end with a quote to the contrary from the man himself:

“Every industrial and commercial centre in England now possesses a working class divided into two hostile camps, English proletarians and Irish proletarians. The ordinary English worker hates the Irish worker as a competitor who lowers his standard of life. In relation to the Irish worker he regards himself as a member of the ruling nation and consequently he becomes a tool of the English aristocrats and capitalists against Ireland, thus strengthening their domination over himself. He cherishes religious, social, and national prejudices against the Irish worker. His attitude towards him is much the same as that of the “poor whites” to the Negroes in the former slave states of the U.S.A.. The Irishman pays him back with interest in his own money. He sees in the English worker both the accomplice and the stupid tool of the English rulers in Ireland.

This antagonism is artificially kept alive and intensified by the press, the pulpit, the comic papers, in short, by all the means at the disposal of the ruling classes. This antagonism is the secret of the impotence of the English working class, despite its organisation. It is the secret by which the capitalist class maintains its power. And the latter is quite aware of this.”