Clive Lewis: Labour must fight for free movement at the next election 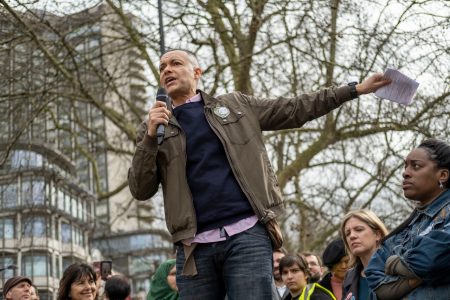 The 2017 general election was an incredibly exciting time. I was proud to campaign on a manifesto full of promises that just a few years earlier would have been derided as fantasies and wish lists laughed out of the party – the abolition of tuition fees, nationalisation of water and the railways, free childcare and a dramatic and unprecedented investment in green jobs and technologies.

Above all it marked a turning point – a moment after which we would cease triangulating and fight for our own vision of society – not just the wealthy and the Tories in their back pockets. But it’s far easier to point at what gave me pride – much harder to admit our errors.

The 2017 manifesto committed to ending freedom of movement with Europe. No ambiguity, no ambivalence: it would end after Brexit. It pledged to keep the disastrous ‘No Recourse to Public Funds’ policy, which denies migrants access to basic public services, and was silent on detention centres.

Abandoning the cause of migrants’ rights is always a moral failure for the left. There is not a shred of truth to the idea that immigrants are to blame for our failing public services. But it’s not just false, it’s a lie, and one put forward by those desperate to deflect responsibility for their own criminal wrecking of our society – the Tories, exploitative bosses and those who want to crash us out of Europe so they can turn Britain into their fantasy tax-haven oasis.

Our party, unfortunately, has a long and mixed  history when it comes to the issue of migration. Interspersed with more progressive approaches are occasions where the labour movement has thrown migrants under the proverbial bus.  Now, it’s time to change that mixed track-record and make a positive case for the right to move. Every day we run away from the debate, the political right make advances on our communities, spreading their nonsense and giving cover to the powerful. The cause of migrants’ rights is inextricably tied to the kind of society we are already promising to build in government: one run in the interests of us all. Because it doesn’t matter whether my constituent was born in Sheffield or Sri Lanka: they will have all faced the Tories’ onslaught on our schools, NHS and welfare.

An election is coming – within the next few months, in all likelihood. We should enter that campaign on an even bolder manifesto, one which promises to defend the freedom of movement we already have with Europe and to treat migration from the wider world as a positive. In the face of an emboldened far right, we cannot afford to compromise – we must tackle their lies and hate head-on. And we must match our anti-racist rhetoric with the policies migrants, refugees and asylum seekers need, and be willing to champion them without hesitation.

We should obviously have no illusions that we can undo the decades of xenophobia concocted by the far right in the space of a few short weeks of campaigning. We won’t. Those ideas have been corroding our political culture for far too long. But if we end up coming to power, we will have an unprecedented opportunity to rewrite the narrative and offer real solutions to people’s concerns about jobs, wages and public services: strong workers’ rights, a real Living Wage for everyone, investment in green jobs, affordable housing and a well-funded, fully public NHS.

In these often bleak times, it’s easy to forget that Labour could be about to form a government. If we do, I hope  it will be remembered as one that finally fought back against political racism and xenophobia – transforming Britain for  all of us in the process.