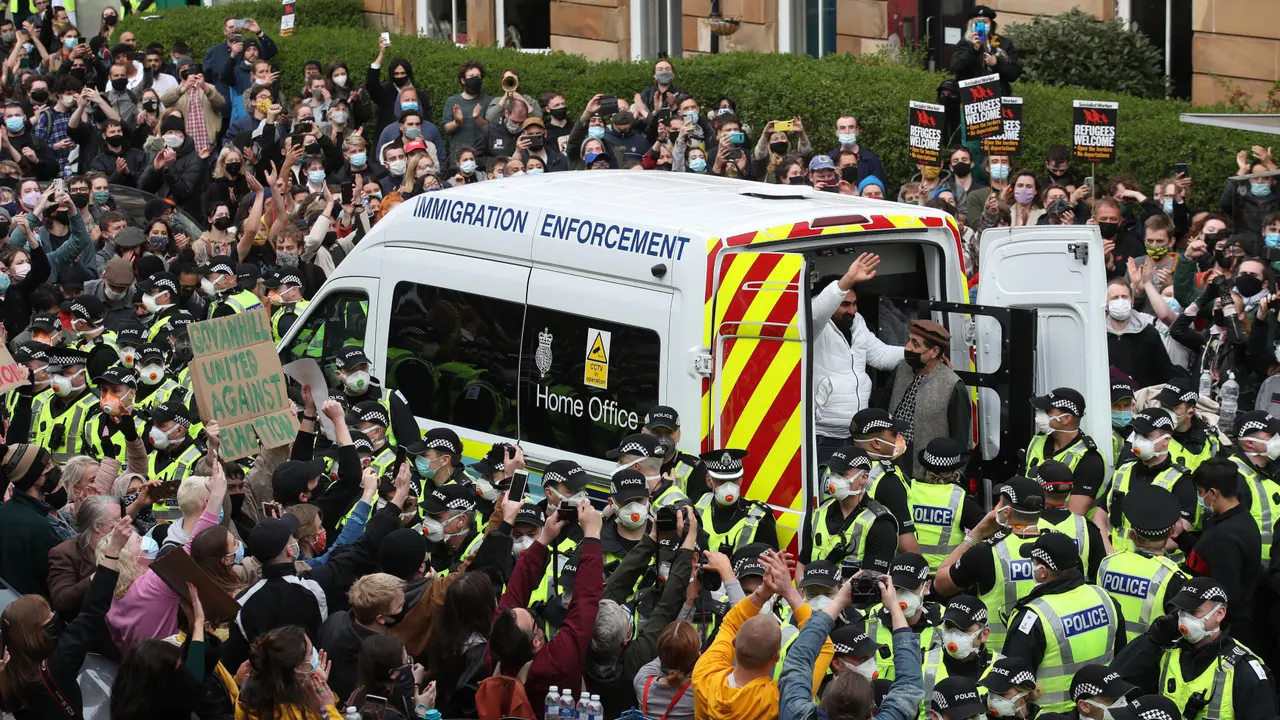 Border enforcement has been evaded, subverted, and resisted for as long as it has existed. Evading detention and deportation has been a necessary act for many migrant communities looking to live a dignified life in the UK, and has been made more urgent by the ramping up of hostile environment policies since 2011.

One way that communities have cared for each other and fought back is through the establishment of anti-raids groups. The groups both reflect, and help to build, strong communities of solidarity. They hold in-person meetings, door-knocking sessions and stalls to distribute information (translated into relevant languages) about people’s rights and ways to avoid, prevent or intervene in raids. Recently, social media has been utilised to quickly spread the word and bring crowds to blockade immigration removal vans.

Workers’ organisations also have a history of supporting anti-border struggles. The Latin American Workers’ Association was involved in the establishment of the Anti Raids Network in 2012, three years after SOAS university used an immigration raid against migrant workers organising for a living wage. In 2022, couriers organised in the IWGB helped to march police out of Dalston after they tried to enforce immigration law against riders simply doing their job.

Events in Glasgow on 12th May 2021 set a new standard for community protests in rolling back the hostile environment, and were underpinned by strong activist networks in the city. When an urgent call went out on Facebook reporting an immigration enforcement van on Kenmure Street, activists placed themselves under the police van to stop its departure. Hundreds turned up, with food and water for each other, to protest and block any chance of the van leaving. A local human rights lawyer eventually negotiated the detainees’ release and safe passage to a nearby place of worship. Since then, the model of mass action has successfully prevented immigration removals again in Dalston, Peckham and Leeds, while alerts of immigration vans are gathering greater traction on social media. The blocking of vehicles carrying detainees was also essential to preventing the deportations to Rwanda in June. Direct action certainly brings results, and is spurring more organisation, as more anti-raids groups are forming in cities across the UK.

Justifiable optimism for these actions must be measured against the severity of the situation with which we are faced. Despite forced migration of people continuing to increase worldwide, the Conservatives remain committed to the explicit intention to increase deportations, as the Nationality and Borders Bill intends, while Labour’s leadership offers little opposition. Undoubtedly, we need more anti-raids groups, more widespread awareness and readiness to resist raids, and more direct actions to block deportations. Crucial as these actions are, we also need to think about what happens after raids are resisted. Will people go back to suffering with no recourse to public funds, hyper-exploited, with no legal right to work, without access to healthcare, worrying about the next raid? Effective as raid resistance is, these groups must aim to build a world in which raids do not exist at all.

The raid resistance in Dalston showed the power of the workers’ movement to resist the enforcement of the border. While trade unions have a history of supporting members against deportation back in the ‘80s and ‘90s, the major unions today have failed to recognise borders as a workers’ issue. Migrants’ rights and the right to free movement need to be recognised as the basis of recruiting and organising workers in unions, as IWGB and UVW successfully have done. Not only can workplace organisation protect us against immigration raids, it can also be a tool to withdraw our labour from sustaining border regimes. When I was at school, teachers and parents protested and prevented immigration status monitoring taking place in the classroom. Campaigns are ongoing against immigration reporting by university workers, with local union branches best placed to coordinate the withdrawal of consent for the Home Office’s sprawling presence in education.

As the border permeates more aspects of our lives, so too do we gain agency to stop its enforcement. At the sharpest end of the hostile environment, PCS, the civil servants’ union, has passed policy to support its members in refusing to carry out deportations. We need to agitate to strengthen and popularise this policy: aviation workers, for example, have a great deal of agency to prevent deportations. Such action might seem far off right now, but so did the anti-raids actions 18 months ago. Joining your local anti-raids group is a great way to keep building this movement. Think about who or which local areas are at most risk of immigration raids. Where there are unorganised precarious and migrant workers, the example of IWGB and UVW can be a great inspiration to show what can be done. And if your work involves enforcing hostile environment policies, think about drawing the links with your workmates between the mass street actions and workers’ actions that can work together to win free movement for all.